A Budding Florist Since Age 12

George Clements officially opened the doors to George's Flowers in 1981. However, the story behind this Roanoke mainstay began growing roots in the community when George was just a boy with a love of plants and gardening. George's grandfather, whom he was named after, would often take him to visit local nurseries and greenhouses and showed George in a book that their names mean "farmer" or "earth-worker." Soon, the two built George's first greenhouse when he was only 12 years old.

This was also the age where George began developing his business skills. After all, he needed to purchase gardening tools, seeds, plants, and other materials to continue caring for and growing his greenhouse. Having a grandfather who owned his own mobile home business came with a few perks. George would work with his grandfather every day once he got off the school bus. As he studied and did homework, George also answered phones, took messages, and locked up the homes at the end of his shift. He was a shadow to his grandfather, learning how to be a successful entrepreneur and business owner, interacting with adults, and fostering his communication and customer service skills.

As spring rolled around during the first year of tending to his greenhouse, George decided to make a profit by selling freshly grown tomato plants, geraniums, bedding plants, and hanging baskets. Much to his and his grandfather's surprise, all his inventory sold out after one weekend of being open for business. This led to a bigger greenhouse with even more plants and flowers to nurture and grow. The following year, George found himself selling houseplants and providing plant rentals and maintenance to customers and local businesses with fern bars.

During the '60s and '70s, houseplants were a hot commodity, and many restaurants and office buildings incorporated interior plantscaping into their designs and upgrades. In turn, George found himself working with interior designers, architects, and business owners. He provided green and potted plants that seamlessly fit the light and placement requirements to complete projects and bring to life what his customers had envisioned.

As his business grew alongside his greenhouse, George's success became impossible to ignore. At 15 years old, The Roanoker Magazine wrote an impactful article about his booming small business, and not long after, Medeco Security Locks, 3M, IBM, Pizza Hut, Red Lobster, The Library Restaurant, Catawba Emporium, City of Salem Courthouse, and a slew of other companies found themselves on George's client list.

Since George was too young to drive himself, with help from his father, Leroy Clements, and mother, Norma Jean Clements, he made weekly rounds delivering fresh plants and flowers and tending to fern bars to keep them fresh and thriving. Norma Jean played another critical role by assisting and teaching George office skills, like how to keep his ledgers and checkbook meticulously recorded, keeping the taxman happy.

After being a member of the first graduating class from the new Salem High School in 1978, George enrolled at Radford University. With continued support and assistance from family, he operated his plant leasing business from college. During his second year at the university, George connected with Flowers Wayne Jones in Virginia Beach, who offered him a summer apprenticeship. Although he never made it to the beach, George did soak up invaluable hands-on experience, knowledge, and inspiration to open his own flower shop.

Upon returning to Radford University for his third year, George filled his class schedule with every marketing and business course possible and decided to end his college career before his fourth year. Instead of writing a senior thesis, he wrote a business plan. In 1981, George officially established George's Flowers and the doors to his very own floral shop were open in the Glenvar Area of W. Salem.

Shortly after opening his shop, George met a young man, Doug Lindamood, who proved to be a driving force and played an instrumental role in making George's Flowers what it is today. During the early days of George's Flowers, Doug was often the source of laughter. For over 30 years, Doug assisted George with just about every aspect of the shop and wore many hats, including Design Room Manager, Buyer, and Wedding Event Director. Together, the team triumphantly encountered both planned and unplanned changes in the business and celebrated incredible milestones of George's Flowers.

After just six months of success, George purchased Nobles Flowers as well as their building, located on Church Ave. Merely one month later, he found value in consolidating and moved his original location in Glenvar to the new shop on Church Ave. On July 17, 1985, ten years after his first feature article in The Roanoker Magazine, he and his team opened a storefront at the brand-new Valley View Mall, which operated for three years and became the "go-to spot" for unusual exotic plush animals.

In 1997, another George's Flowers appeared on the corner of Franklin Rd. and Brandon Ave. as a florist and garden center. Four years later, George merged his store on Church Ave. into today's location at 1953 Franklin Rd. George's growth continued in 2008 when he purchased yet another flower business, Floral Renditions, and further expanded the George's brand.

Today, you can still find Folkmanis Puppets and uncommon, specialty plush animals at George's Flowers, along with long-lasting, always fresh, beautiful, and carefully crafted floral arrangements and plants for any occasion. 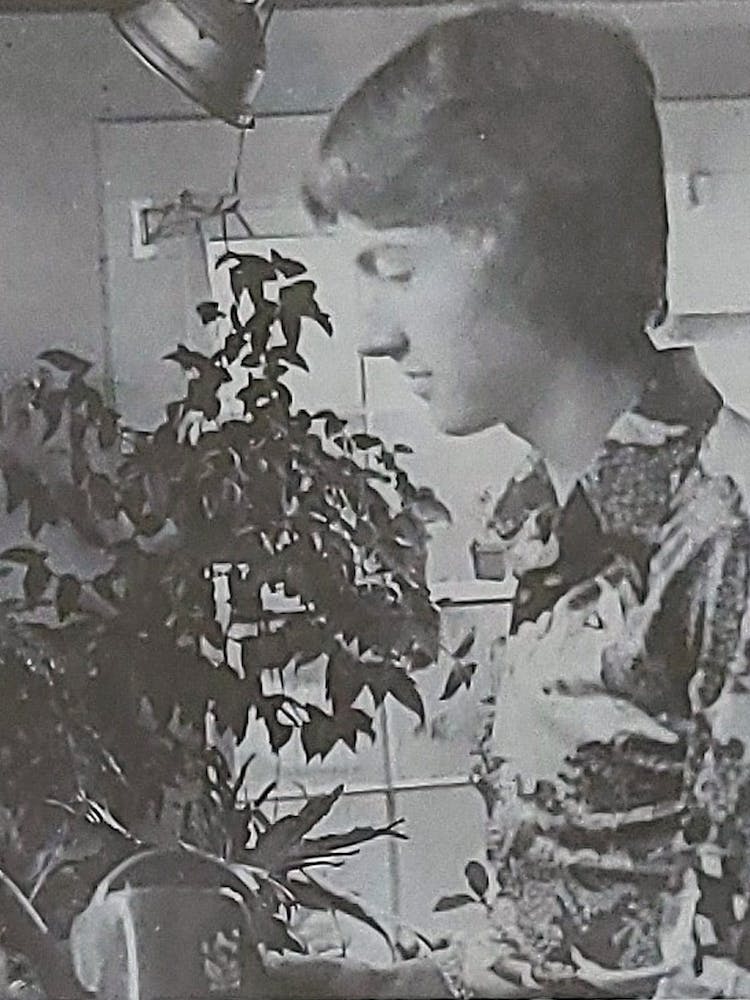 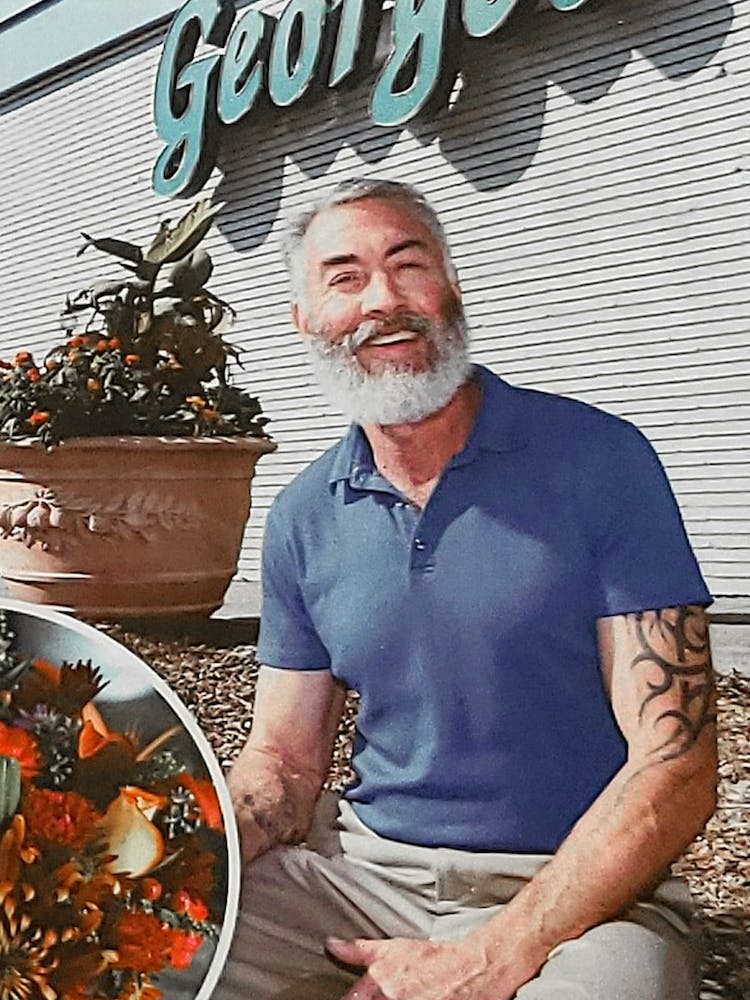 George poses outside his Roanoke, Virginia flower shop for a 2014 magazine shoot 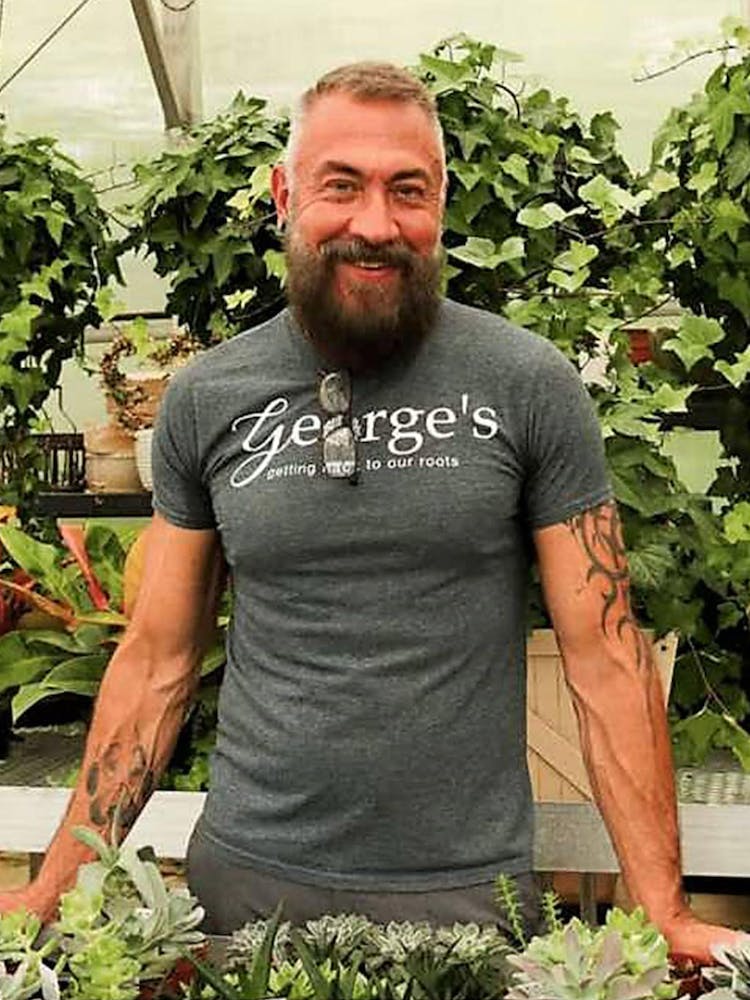 A modern photo of George, handling plants in the greenhouse